A unique experience for a daily escape from routine

Hamam Omerye offers a unique, authentic and luxurious experience that makes our daily bath or shower a significant affair! Escape from your everyday life, indulge in the healing properties of steam and enjoy a deep exfoliation and relaxing massage. Relax with your tea and continue your day or night in the city centre. Revitalise yourself by becoming part of the HAMAM OMERYE lifestyle!
The Hamam Omerye baths, a historic jewel in the heart of Nicosia's old town, is located in Tilliria 8, next to many other historical monuments such as the Omeri Mosque and the Archbishop's Palace. With respect towards the tradition of the space we bring you an authentic experience of a Hamam. The refreshing feeling that takes over you when you experience our Hamam, we want to share and spread it or better yet to bring it back to our culture and everyday life, which used to be such an integral part for centuries ago. At Hamam Omerye, aromas and colours take you to a truly magical atmosphere of oriental baths,
with the imposing dome of the cabins but also the bath with the polygonal marble, warm surface in the centre and the individual troughs in the perimeter, as well as the other Prive smallest spaces designed with respect to tradition and adapted to modern life. In 1570-71, when the island fell into the hands of the Ottomans, Hamam Omerye was built as a donation to the city by Lala Mustafa Pasha. It was named in honour of the Omar caliph, making the area known as Omeriye. In 2005 it received the Europa Nostra Award for Architectural Heritage Conservation.
In 2005 it received the Europa Nostra Award for Architectural Heritage Conservation. 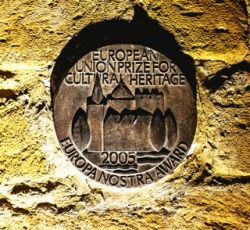 Historically, the Hamam gained much more importance than just the simple concept of a place where one could take a relaxing bath to cleanse. It was a combination of rites and rituals closely related to everyday life in which the elements of nature were redeemed to purify body and soul. In the old days, Hamam baths were often described as "silent healers". Hippocrates, as known, said that frequent exposure to hot and humid conditions of the Hamam bath offered the best possible protection for our general health. He believed that the "artificial fever" created under these conditions promoted faster blood circulation, produced more antibodies and strengthened the immune system.

In recent years, the numerous benefits of the Hamam bath are now widely recognised and well-established. Hyperthermia or overheating enhances detoxification while hot steam increases body temperature and speeds up metabolism and blood flow. The thermal contrast resulting from the use of cold water combined with hot steam is extremely refreshing and enhances cardiovascular function. In turn, increased metabolism and enhanced blood flow stimulates the muscles, making them release the stored toxins.

Where to find us